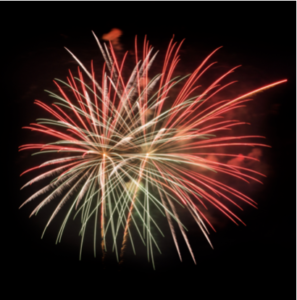 It is that time of year again! The Fourth of July is only a few days away, and it’s a great time to bust out your grilling skills to kick off the summer season. It’s also time for fireworks to make a reappearance in many neighborhoods across the country. Speaking of fireworks, even though they are pretty to look at, they can also be potentially deadly to deal with. Let’s explore how you and your family can stay safe while enjoying your Fourth.

How do fireworks work?

Fireworks are explosives that can shoot into the sky to create a stunning array of multiple colors. When the fuse is lit, a tiny explosion occurs within the firework to give it lift into the sky. Once that fuse burns the rest of the firework, the “boom” is heard, and a splash of colors will light up the sky. But let’s start with the basics.

According to the Library of Congress, “to assemble aerial fireworks, trained professionals called pyrotechnics first make stars by mixing the black powder with different chemicals or metals. When reacting with heat from exploding black powder, the chosen additive produces a certain color”. The chemicals (or called pellets) are contained in cardboard, or a plastic container called a shell to protect it from going off too early. The pellets, depending on how they are packed, will give the firework its shape.

What are some tips to stay safe?

The National Safety Council (NSC) provides some excellent tips on how to stay safe while using fireworks. Below are their tips directly from their site, along with Cross Valley Health & Medicine’s thoughts.

Now that you are aware of some essential safety tips for using fireworks let’s all enjoy this year’s Fourth of July responsibly. If you and your family are looking to see a firework show this year, try Googling “firework show near me” and several events may come up in your search bar. Make sure to keep these tips in mind so everyone can stay safe. If you do end up getting burned, or have any questions about this article, Cross Valley Health & Medicine providers will be on standby to help you the best they can during this holiday weekend.

Cross Valley Health & Medicine is a primary care practice located in Newburgh, NY, allowing for both virtual and in-person appointments. The practice has two medical providers on staff, a medical doctor who is dual board-certified in Addiction Medicine and Internal Medicine and a family nurse practitioner. Both providers are eager to see new patients for the following programs: Addiction Medicine, Behavioral Health Management, HIV/AIDS Care Management, Internal Medicine, Medical Marijuana Certifications, Medication-Assisted Treatment, STDI/STI Care Management, and Weight Loss Management. If you are interested in becoming a patient of Cross Valley, please click here to access our online paperwork portal.